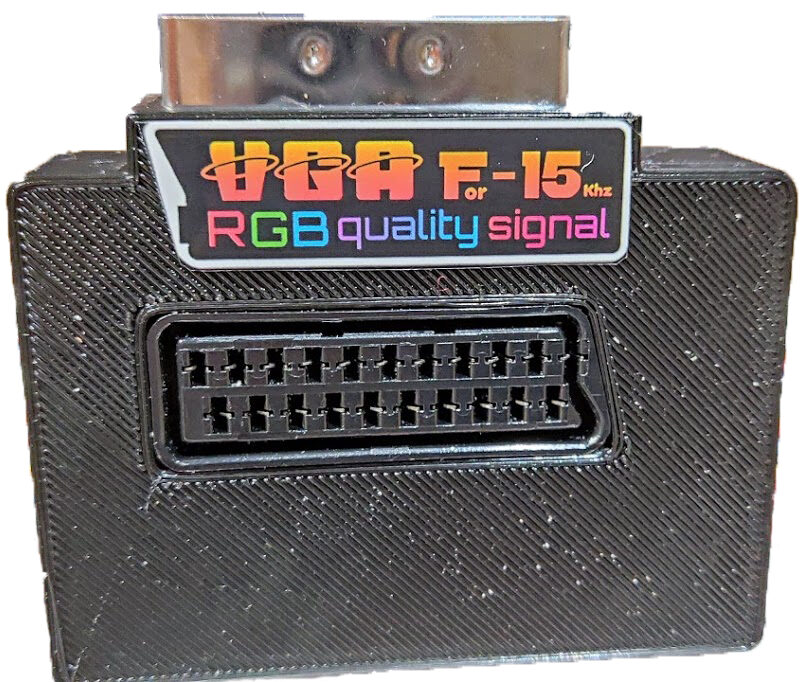 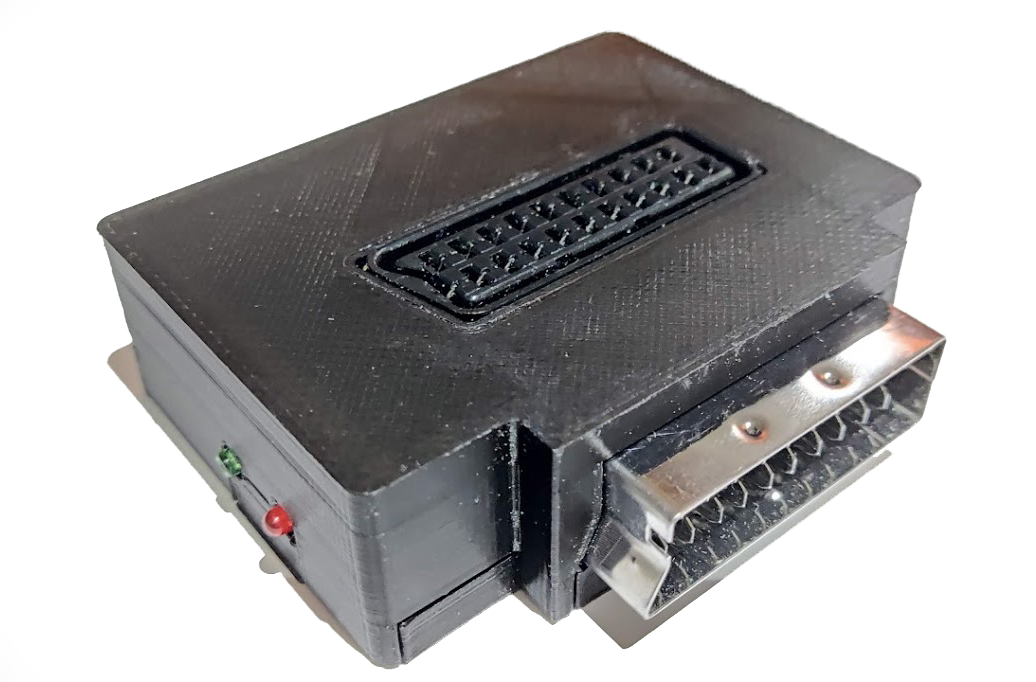 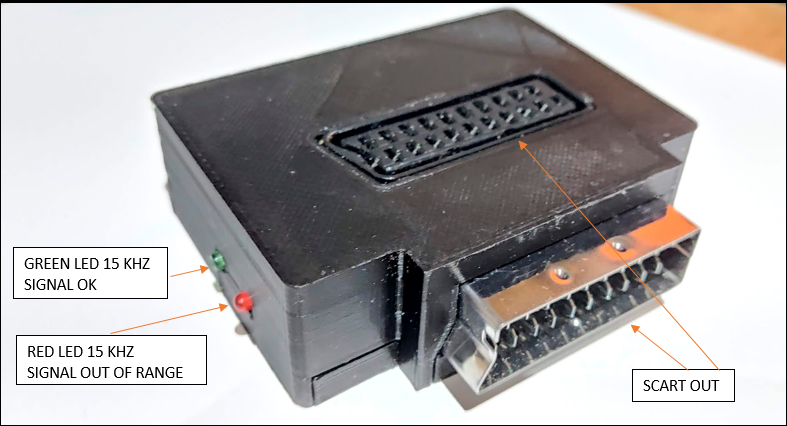 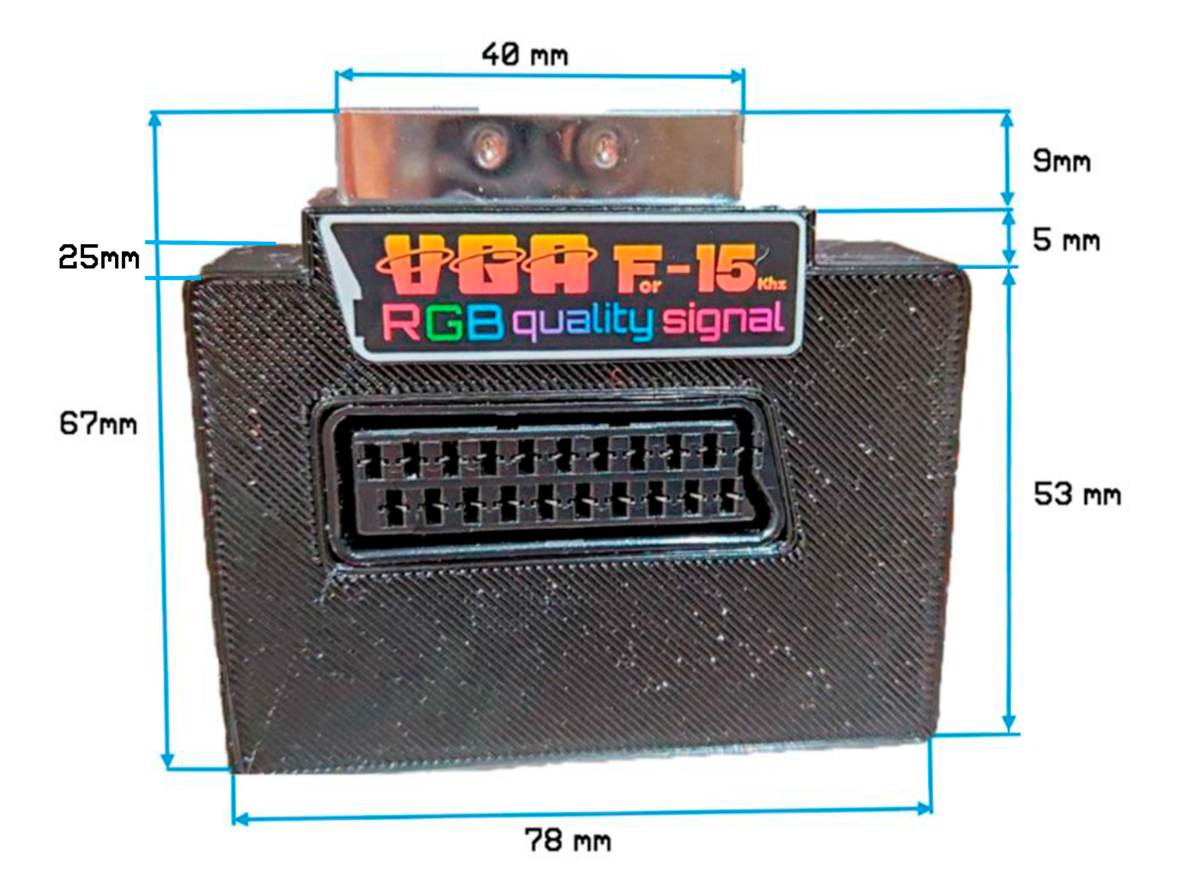 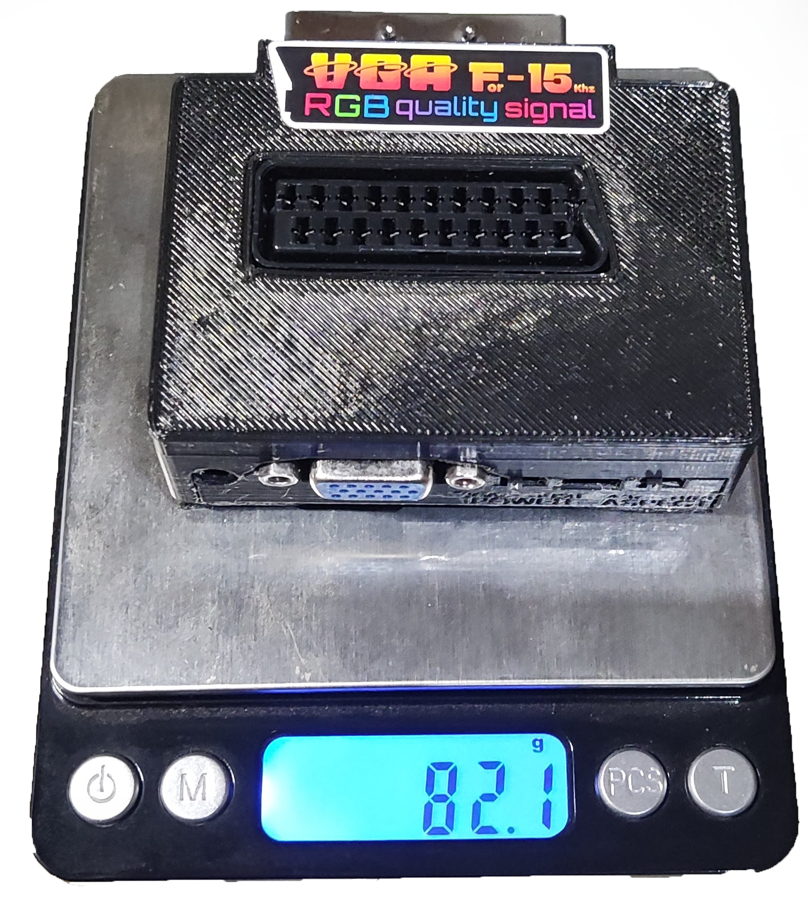 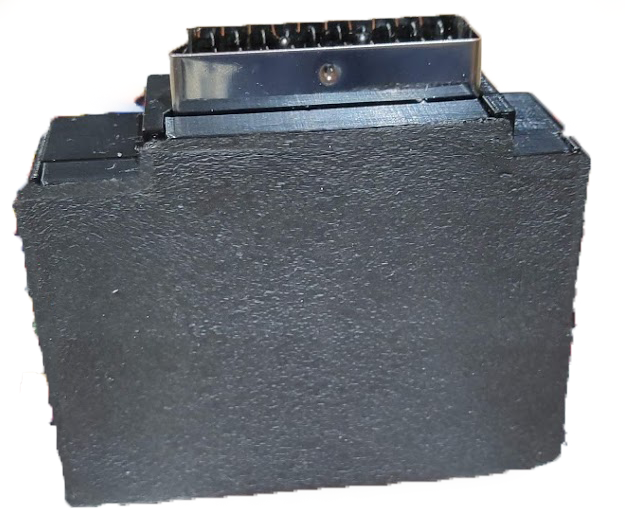 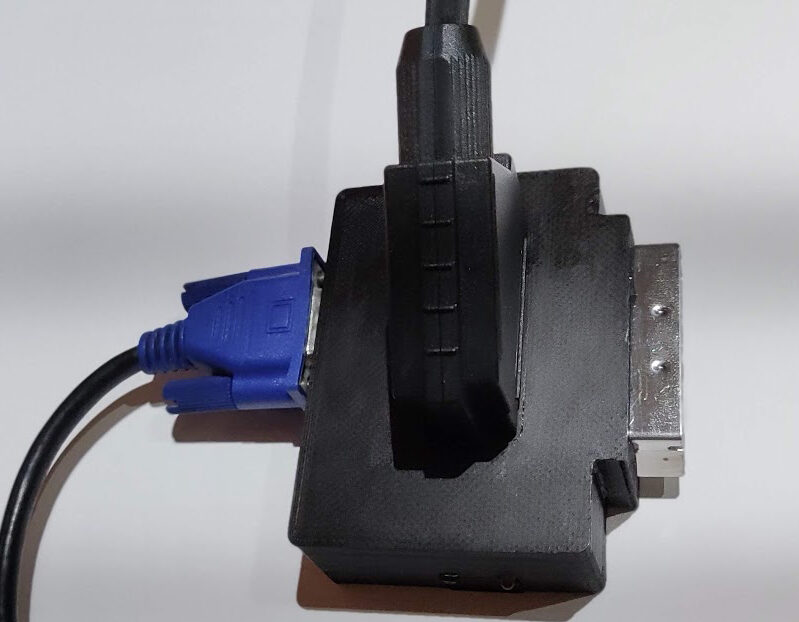 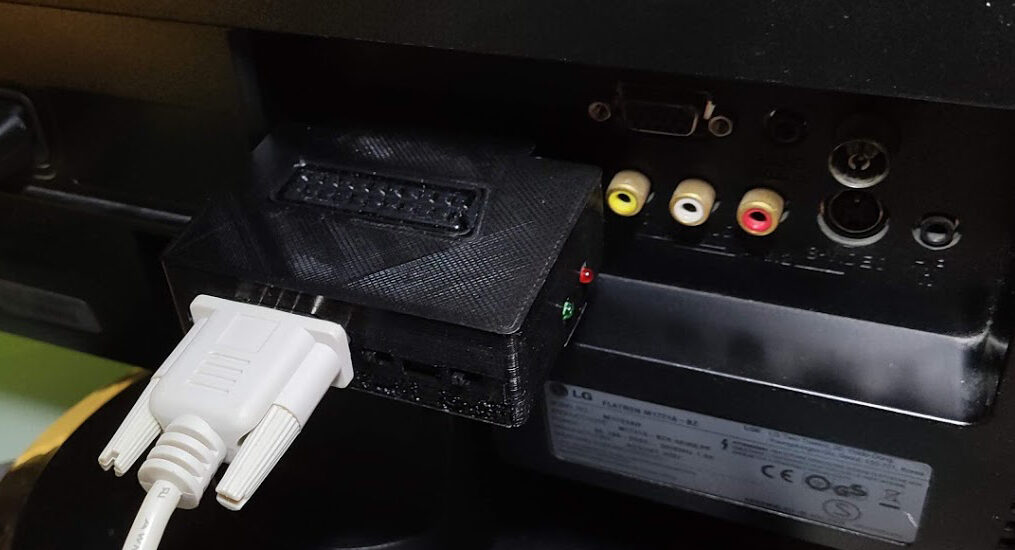 This VGA-SCART converter is the most advanced in its class. Thanks to the programmable controller that it incorporates, it is capable of protecting the TV from any signal, outside the 15.7 khz range.NOT VALID FOR ARCADE MONITORS WITH SEPARATE SYNCHRONISMS. THE ADAPTER WORKS ONLY ON HOME TV'S
We can use a VGA cable, one length and add a scart cable that will double the distance, to reach the tv.
The core of this VGA to Scart adapter is a PIC16F18313 microcontroller with configurable logic. It has the following advantages:
-Automatically detects the polarity of the input synchronism signals and dynamically configures the configurable logic cells so that they correctly generate the output synchronism signal. This allows it to function regardless of whether the input sync signal pulses are positive or negative.
-It has LEDs that inform about the power supply and the frequencies of the synchronism signals are correct (a correct horizontal frequency is around 15.7KHz)
-If the horizontal sync frequency is not correct or the horizontal sync signal does not change, the PIC disables the RGB select signal, the SCART select signal (STATUS) and the output sync signal. The latter is useful for protecting some older arcade monitors.
-Most VGA devices comply with the DDC host protocol and can directly power the adapter. However, it has an optional USB power input.
-Does not require a power supply or external DC-DC converter to generate the twelve volts of the scart selection signal (STATUS). That tension is generated by the PIC itself.
-It has a switch to select the screen proportions (16: 9 or 4: 3).
-Includes audio jack input.
-It has two scart outputs, one male (for direct connection to the television) and the other female (for connection through a male-male cable).

-Some VGA cables lack any of the 15 lines of the DE-15 connector and do not allow the adapter to be powered. Check that your VGA cable has all 15 lines.
-The male and female euoreconnector outputs should not be connected simultaneously, not even to devices that are switched off.
-It requires a horizontal input frequency of about 15.7KHz, so it is not compatible with devices such as Pandora's Box or Game Elf.

-Gummed base to prevent slipping and ensure a better grip

INSTRUCTIONS FOR USE VGA ADAPTER F-15

1º Connection of the VGA cable in the adapter:

The VGA cable, regardless of the length, must have all the pins wired, there are very cheap cables that to save costs, not all the pins are wired. These cables discard them, since if we do not have voltage on pin 9 of the VGA, the adapter will not work. 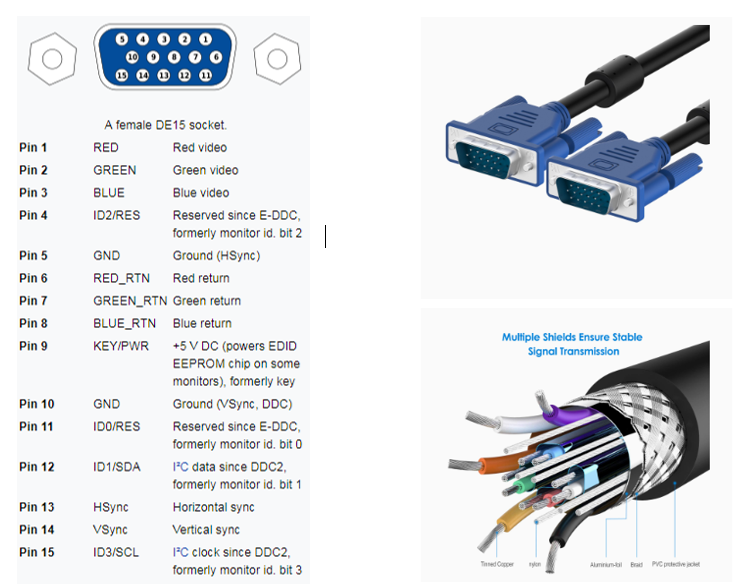 2º The adapter has a switch to switch the power supply from the VGA port to the USB port. Under normal conditions, this switch will be in power mode from the VGA port. For older graphics cards, which do not provide 5 volts, then we must connect a mini USB cable, and switch the switch.

3rd The adapter has the ability to choose the aspect ratio, between 4: 3 and 16: 9 through a switch:

The adapter has a 3.5 mm JACK STEREO connector, in this connector the male stereo Jack cable is connected, from the PC, or from the audio source, which must be reproduced on the TV speakers. In case of using an external speaker system, it is not necessary to use this connector.

When the PC or raspberry starts up, the RED LED will light up, as soon as a compatible signal (15 khz) is received, the RED LED goes off and the GREEN LED lights up.The Red led also indicates an incorrect power supply.

This connection could damage the adapter, DO NOT CONNECT MALE AND FEMALE CONNECTOR AT THE SAME TIME 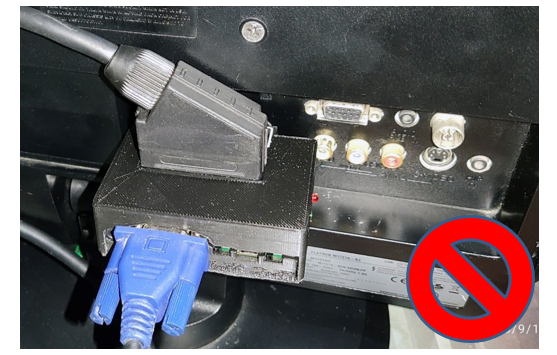 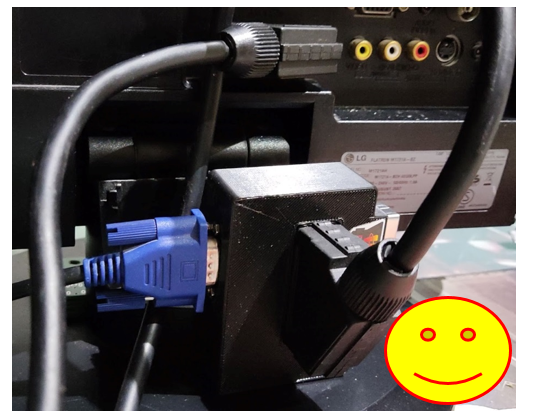 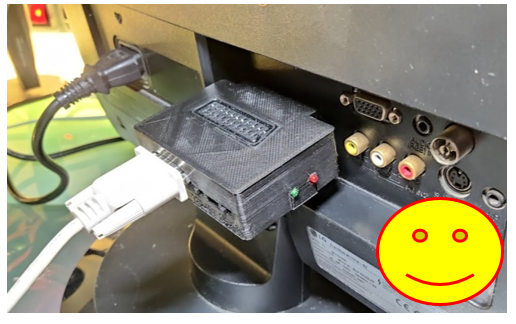 And finally a demonstration video of the adapter: